Boyd Rice Solicitors were instructed to act on behalf of Ms J in relation to her personal injury claim. Our client instructed that she was the driver of a moving vehicle which was hit on the passenger side by another car which was performing a U-turn.

The impact pushed our client’s vehicle into a wall. Our client developed pain in her right wrist immediately after the incident. Details of the subject accident were locally resolved before an ambulance arrived. She was initially treated at the scene for chest pains before being transferred to the Royal Victoria Hospital.

She was x-rayed at hospital where a hairline crack in the right distal radius was diagnosed.

Court proceedings were issued against the at fault driver. Approximately one week before the scheduled Court Hearing date, the case resolved in Ms J favour in the sum of £5,800 plus costs.

Following the successful conclusion of her claim our client commented as follows;

“Boyd Rice Solicitors put me at ease from the very beginning. Everything was explained to me and I fully understood the process. I was kept informed throughout my case and was happy that the case settled outside of Court.”

If you have been involved in a Road Traffic Accident and would like advice, please contact us by phone on 02891 817715 or by email claims@boydricesolicitors.com 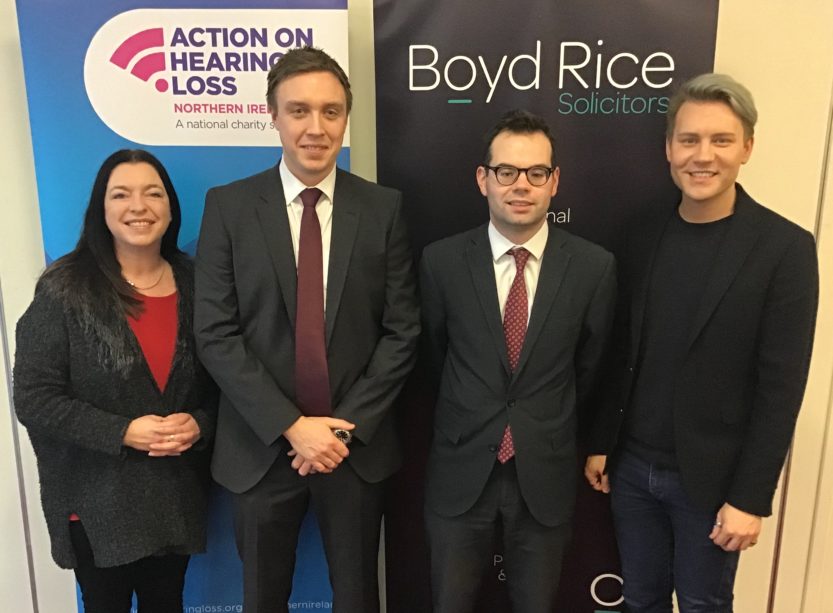 Boyd Rice Solicitors are delighted to announce Action on Hearing Loss as our 2019 charity of the year.

Action on Hearing Loss support people throughout Northern Ireland and the UK who are deaf, have hearing loss and/or tinnitus to live the life they choose. They run free hearing aid support sessions and provide assessment and rehabilitation services for people with hearing loss.

We have acted on behalf of hundreds of people who have suffered loss of hearing or Tinnitus following exposure to excessive noise and believe that this great charity can make a real difference to peoples’ lives.

We will be engaging with our clients and with the local community in an effort to raise money for this fantastic cause. Further announcements in relation to our fundraising events will follow throughout the year.